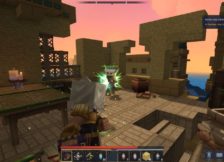 Upcoming adventure game Hytale might have origins in one of the most successful Minecraft community servers, but it definitely isn’t a simple follow-on to Mojang’s iconic block builder. One of the sandbox-RPG game’s devs has said they “don’t want people to think that we’re, like, building Minecraft 2.” In an interview with Edge magazine (issue 342), Hytale project lead at developer Hypixel… Read more »