What we know about Hytale Modding 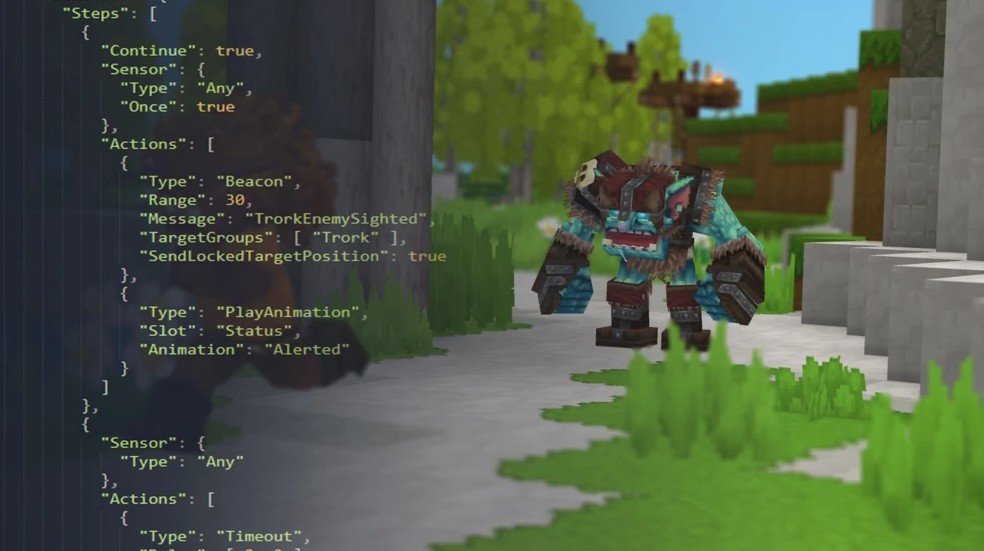 Hytale supports modding. According to the Hytale FAQ, the game was built with modding in mind. Because of that, the game features scripting, custom model creation, custom sound creation, and a collection of other tools to help creators.

Hytale features a tentatively unknown scripting language. The scripts can be written in-game and their effect can be seen instantly in real time.

The scripting language can be (relatively) safely assumed to be JavaScript – this is because of its use of anonymous objects inside curly brackets.

The shown effect on the NPC however, probably has nothing to do with the shown code, as it changes into a pig when the code gets executed.

Recently, we gained obtained knowledge about the npc behavior scripting. Hytale uses .json scripts to give their mobs life; and these scripts are divided on two parts: The sensor and the action.

On the first part, on the script, the npc detects something from the environment (the player, rain, some dropped item or entity), and in the second part executes an action, this action can be some code, another sensor, one common built behavior (like fleeing or seeking), one animation or everything in between.

There is not information if the .json behaviors are used in any other part of Hytale right now.

Currently, we have knowledge about of the above mentioned Script Editor and a Model Maker tool. The former, at the moment, we need more information, we only have the trailer footage that isn’t much. The latter has been detailed in the dev blog “Take a closer look at Hytale Model Maker”