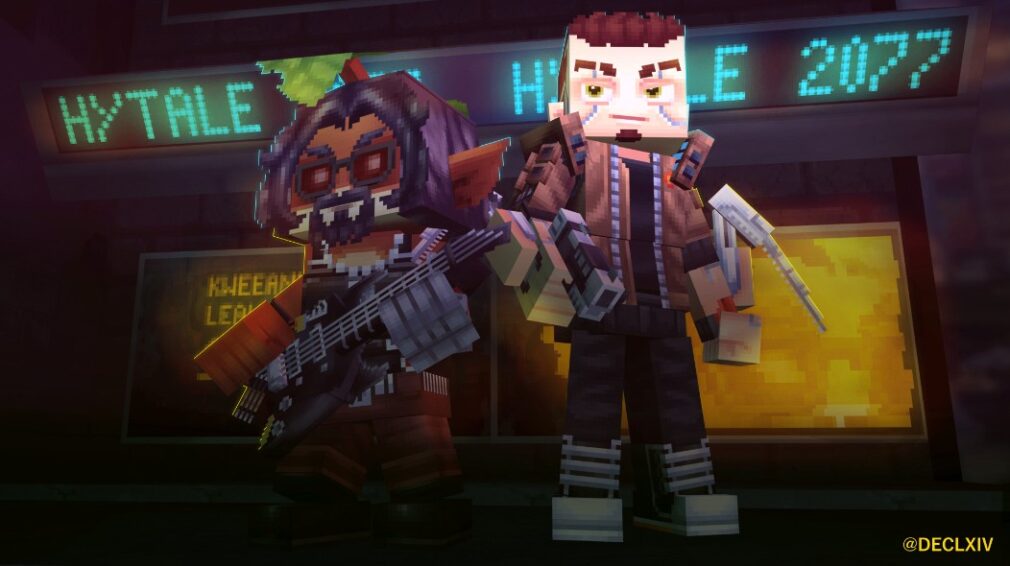 Much like our Hytale YouTubers to follow pre-release the following is in no particular order. Below you will find just a few Hytale Twitter creators we think you should check out.

If you would like to learn more about PebbleRighteous and his art process, along with other subjects about the video game industry and his thoughts regarding Hytale, you can check out an interview he did with the fantastic Hycast below.

Within the Hytale community, there are cornerstone members with endless talent that also support the work of others and @DecLXIV is one of them. Dec has become one of the most well known and highly regarded Model creators within the Hytale Community. His work has drawn public acknowledgment by Hytale Developers and he was also featured in the official Hytale Fanart Showcase Vol. 3. Below is some recent work by Dec the mind-blowing Cyberpunk X Hytale.

Dec also uploads timelapse videos of the creation process on his YouTube. It’s fascinating to watch. Below is an interview he did with Hycast last year covering his design process and advice for newcomers.

We’ve followed Jimtale for some time he hasn’t posted any new projects recently, but his finished projects are just fantastic and very professionally done. He even got public recognition from Noxy and other Hytale Developers for his concept art. We hope to see more from Jimtale his style almost looks like it was created by the Hytale Team it fits so perfectly. you can follow Jimtale on Twitter @Jimtale_

Below you will find a timelapse video Jim put together showing the creation from start to finish of his Hytale sword concept model its an incredible watch and is a perfect showcase of how much work goes into many of the community creations we see.

Bailey recently started sharing Hytale Art on her Twitter and has quickly gained a following for her very beautiful vibrant art style. This has drawn in lots of love from the community and developers alike. Bailey is one to watch and you can find her on Twitter @baileyv_art or you can check out her instagram @baileyv.art for non Hytale-releated art in the same vibrant style it’s really incredible portfolio.

It’s without a doubt that creating fan art requires tons of creativity, and Crimsoncr0w really proves it.

If you’re looking to share your Hytale Artwork the best way to do so is using the #HytaleFanArt hashtag on Twitter. This is the main hashtag used by the community for FanArt the Hytale Team is very active within this hashtag. If it’s Mosshorn related Hytales social media guru ItsBuddhaCat will be all over it. 😛