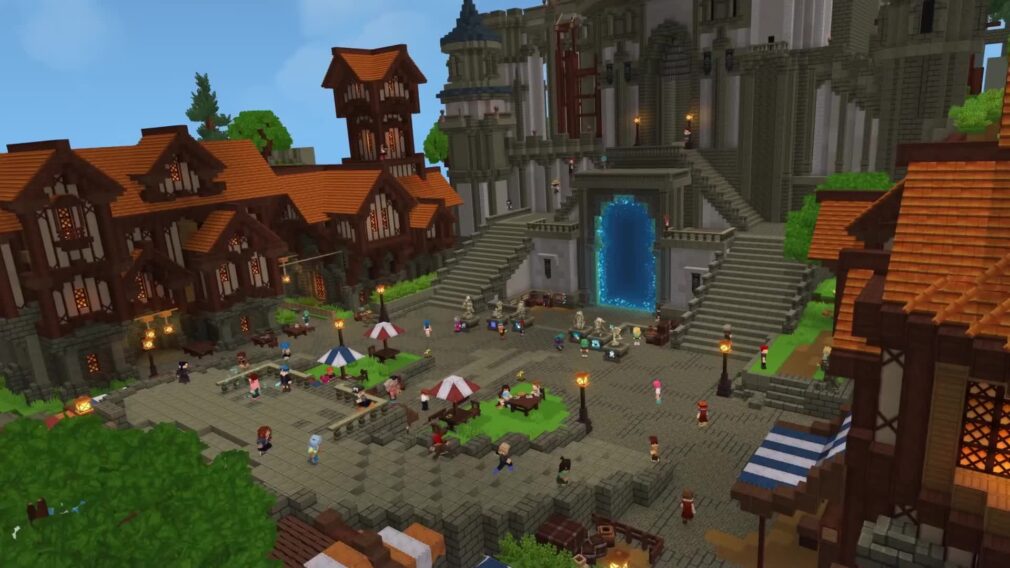 A minigame is a type of game that is played on a server with other players.

Hytale will feature many different minigames able to be played in-game on servers found through the “Minigames” tab. Many of these minigames come directly from the Hypixel server. Minigames coming to Hytale include:

SkyWars is a multiplayer PvP minigame originally from the Hypixel server where players start off on separate islands and battle to be the last player standing.

There are usually around 12 teams of a set amount of players that spawn on islands floating in the “sky” (the void). There are two or three chests full of loot on each spawning island and there is usually a large center island with more chests containing better loot. These chests contain weapons, armor, projectiles, food, and blocks. There is sometimes a “deathmatch” mode where after a certain amount of time the map slowly starts to disintegrate or is destroyed in some other way and the remaining players then have to both fight the other players and survive on a dying map.

BedWars is a multiplayer PvP minigame originally from the Hypixel server, in which players fight to be the last standing. In BedWars, teams of 1–4 spawn on separate islands with a bed which they must protect. If their bed is destroyed, the players on that team can no longer respawn. The mineral spawner on each island spawns minerals which can be exchanged for items such as blocks or weapons. On player’s spawn islands, there are iron and gold spawners, which can be used to purchase starter gear; diamond and emerald spawners, which can be used to purchase more powerful items, are found in the middle islands and take longer to spawn minerals.

Build Battle is a minigame on the Hypixel server where players or teams compete to build structures according to a unique theme. Each round of Build Battle has a unique theme. Players must build creations that match this theme. At the end of the game, each team will vote on all of the builds created in that round.

The Walls is a multiplayer PvP minigame from the Hypixel server where four teams collect resources and then fight to the death.

Four teams spawn in separate areas of the map divided by large walls. After a set amount of time for preparation, the walls will drop, and players will be let into each other’s areas and fight to the death.

Paintball, also known as Paintball Warfare, is a minigame on the Hypixel server where two teams fight to eliminate each other. In Paintball Warfare, two teams, which have a varying number of starting lives, fight each other using paintball guns. The winning team is the team that reduces the opposing team’s lives down to zero.

Survival Games is a multiplayer PvP minigame from the Hypixel server, based on the battle royale format (in particular, the Hunger Games), in which players fight to be the last standing. In Survival Games, all players start at the center of the map on top of podiums. There are a few chests at the center of the map and other chests scattered around the rest of the map, in which players can find food, armor and weapons from. Hypixel has their own version of Survival Games, known as Blitz Survival Games (shortened to Blitz SG or just Blitz) where a blitz star is released after five minutes and gives the player who picks it up extra attacks. Blitz SG is played with between 16 and 32 players.