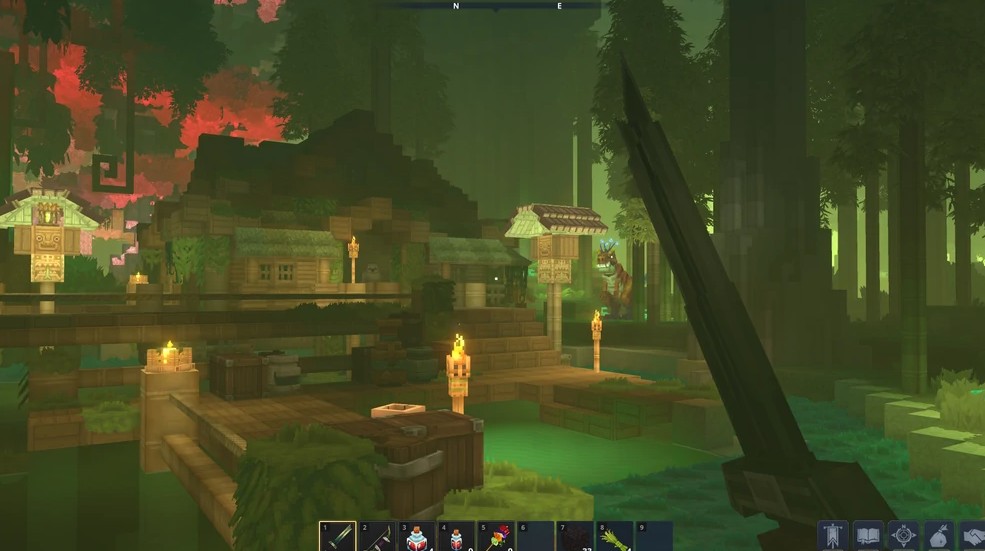 Although each zone has different environments, each one has its own world-generation system. Each zone is composed of several biomes, such as forests, lakes, hills, ravines etc.

Each zone has its own coastline, with ocean bordering at part of it. Even oceans have their own biomes within, giving players more to explore under the water’s surface. Players can travel further out to Deep Ocean waters to find even more rewards and interesting content, however proper planning and preparation is needed to survive those environments.

Outside of the natural world, prefabs and dungeons can spawn. Dungeons spawn with a series of rooms connected together, each one different, with a “treasure room” in the center. These will vary from zone to zone, giving different challenges in each one. Prefabs include pre-made structures, like towers or castles. However they also include objects such as trees or rocks. There have been thousands of prefabs already made for the Hytale world. Despite only 4 zones being confirmed and the game still in the process of being designed, there are already over 7,000.

Aside from regular dungeons, players can find portal dungeons, a special version of dungeons that will lead them to a small “pocket” world, where regular rules don’t apply, and creativity will be necessary to conquer them.

Dungeons are part of the cave-exploration system in Hytale. At the moment, there are two types of known dungeons:

There has been talk of “challenge dungeons” being existent within the game, specified for people who want to test their limits and beat challenges that other “less-skilled” players may not be able to beat. There is speculation that some dungeons may not have breakable walls or floors, in an effort to prevent “skipping through” said dungeon to get to the end reward.

The Deep Ocean is a Biome that includes the Ocean of Orbis. It is an area beyond the Ocean Shelf of each Zone. This aquatic environment is dangerous, but holds many rewards to discover, such as sunken treasure. Players need to be prepared before venturing into the deep ocean.

Shipwrecks may be found in the deep ocean, with Sharks lurking nearby.

Beyond the oceans lie the Infinite Lands

The Ocean of Hytale surrounds and separates land in the world of Orbis. Although not technically a zone, the ocean is filled with unique flora and fauna, prefabs, dangers, and more. Traveling further into the ocean, players will encounter the ocean shelf, a drop off that leads to the dangerous and eerie deep ocean.