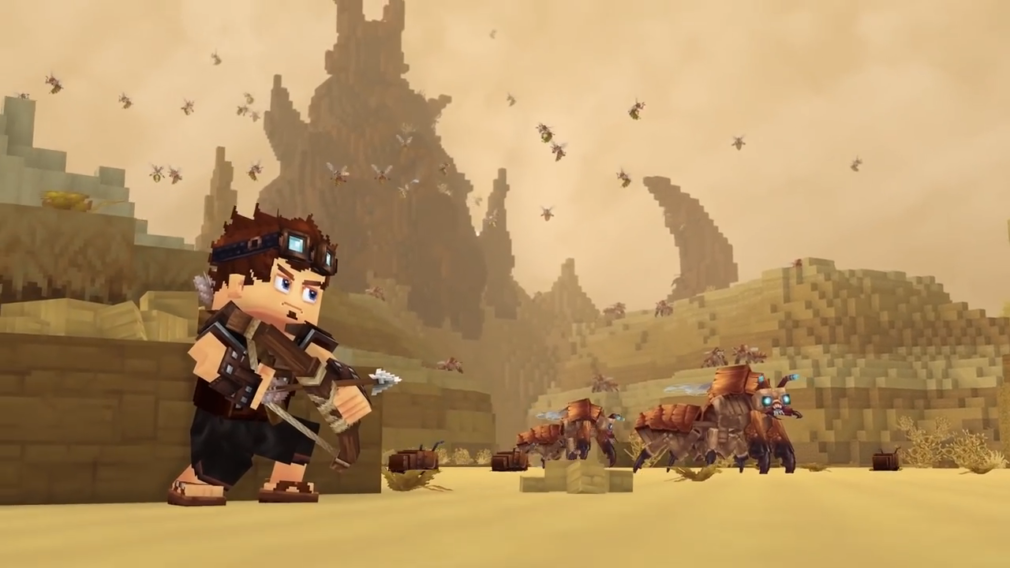 The Scarak are a faction/race in Hytale. Scaraks are a bug-like creatures that live in the Howling Sands. Scaraks can be found in hive structures, and are enemies of the Ferans.

Larvae are spawned from Scarak Egg sacks. After a larvae hatches, it crawls around the Scarak hive until it grows into adulthood. Larvae can either grow into a warrior, locust, worker, or tank.

Warriors guard their hive. They patrol the grounds around the hive, as well as the tunnels inside the hive.

Locusts guard the skies around the Scarak hive.

Not much is known about workers, but they likely do the work of the hive, such as assisting the broodmother and working in Mines like the Feran slaves.

Also known as Shield Scaraks, Tanks act as a living shield, physically protecting other Scaraks or blocking off other areas. It is known that multiple Tanks can line up to make a large wall to block entire passages.

The broodmother is presumably the leader of the hive. She lays the Scarak egg sacks.

The Sand Palace is another ancient, highly-decorated Scarak structure of notability. Underneath the sand palace is a Portal leading to the mysterious Sand Empress.

The Prison Cave is another Scarak Structure. Unlike the Ziggurat and the Sand Palace, the Prison Cave’s true purpose is currently unknown. However because of it’s name it can be believed that it shall function much like real-life prisons.

Scaraks inhabit the Howling Sands on Orbis, found surrounding and inside a large structure called a Ziggurat. The Ziggurat contains a prison cave underneath, which contains a crystal. Four heavily armoured watchtowers are placed around the main building to protect the Ziggurat.

In Hytale’s past, The scaraks enslaved the Ferans, the only other faction that inhabits the Howling Sands. Some Scarak structures may still have enslaved Ferans inside.