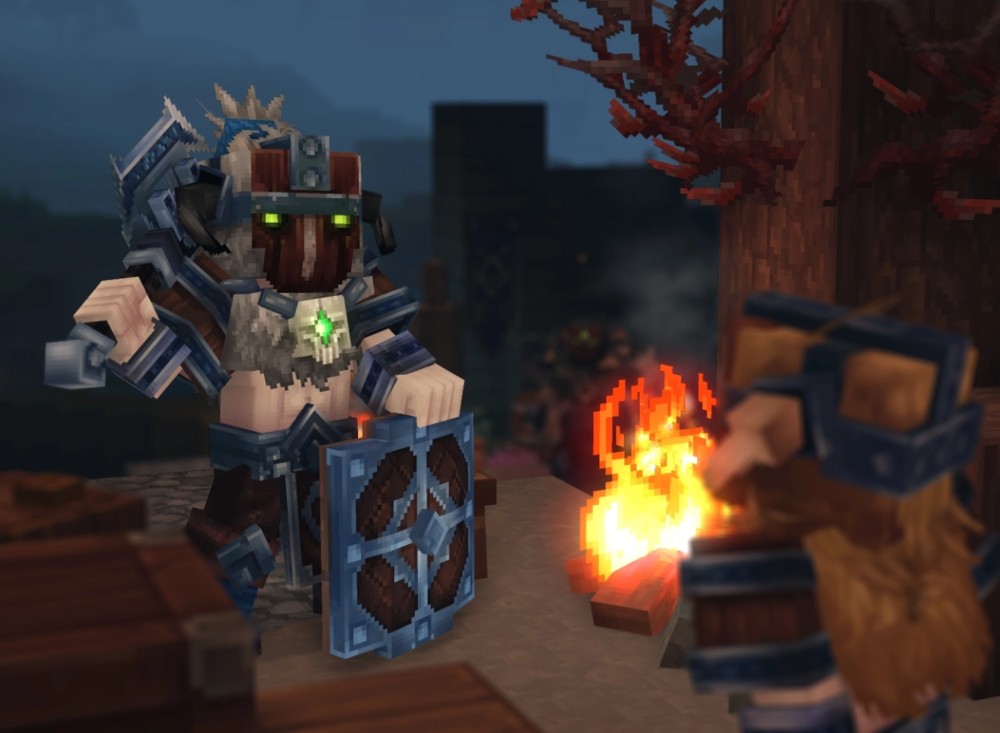 The Outlanders are one of the races of Orbis, who live in Borea (Zone 3). They are a tribal race, who inhabit unique villages built in pine forests and tundra-like areas. Outlanders are not actually a different species, but an off-shoot of the human race that came to Borea. They undoubtedly have some connection to Varyn and the void element. “The Outlanders are a hostile faction whose camps can be found throughout zone 3. They are defensive and territorial and, as such, pose a threat to adventurers and settlers alike“

Almost all Outlanders are equipped with blueish weapons and armor, and wear wooden masks with some sort of animal tusk built in.Though Outlanders are human, they seem to differ in appearance from the rest of their race with glowing green eyes and very pale skin, similar to that of a corpse. The lives of Outlanders is said to be “conflict without end”, battling for survival with the formidable zone they inhabit. Almost all Outlanders have the symbol of Varyn on their chests, and their obsession with him could be the explanation to their isolation from the rest of the humans and their unnerving culture. Outlanders are said to have deep connections with the history of Borea, and likely the rest of Orbis as well.

The Outlanders have many different Archetypes found within their excluded society, each type playing a role in the upkeep in their society, whether it is to gather food, defend the settlements or to take part with the rituals. It is important for a Player to analyse the types of Outlanders before striking as they could find themselves at a disadvantage with the different combat types depending on the Archetype.

Rangers These Outlanders venture far from the camps into Zone 3 in search of animals, such as the Bison, for food. While out of the village they protect its boundaries from potential threats.

These Outlanders are the standard warrior found around and within the settlements, and can defend their villages from Players. They can be found as either male or female. It is currently unknown if they have any other function.

Not much is known about Outlander Chiefs besides the name. Chiefs are very similar in appearance to Warriors, and it can be assumed that they have some authority over them.

The Cultists are the main part of the rituals performed within the Outlander settlements, not much else is known about them.

The Priest is seen as the source of power within the Outlander tribes. They perform in the mystical rituals with Cultists, and likely have something to achieve a mastery over death. A Priest will draw power from the mystical waters of the forests, and will likely preform spells and magical attacks in combat.

The Outlander Colossus is the most massive and dangerous Outlander Archetype. They have a claw-like left hand, potentially having some connection to the rituals that the Priests perform.

Outlanders are said to be constantly on guard, in defense against something, although it is not clear what they are afraid of. They are typically isolationists and prefer to live a life of solitude, rather than more social means. They only rarely venture out from their camps, typically only doing so for food or in order to patrol. However, occasionally certain Outlanders in a village will go on expeditions to some of Borea’s places of interest, such as ancient battlefields from Hytale’s history and rural sites. The reasons behind these journeys are unknown.

Many Outlanders, like Priests and Cultists, perform in mystical Outlander rites or rituals at night. These likely have something to do with the Priests magical abilities or the immortality that Outlanders are said to possess.