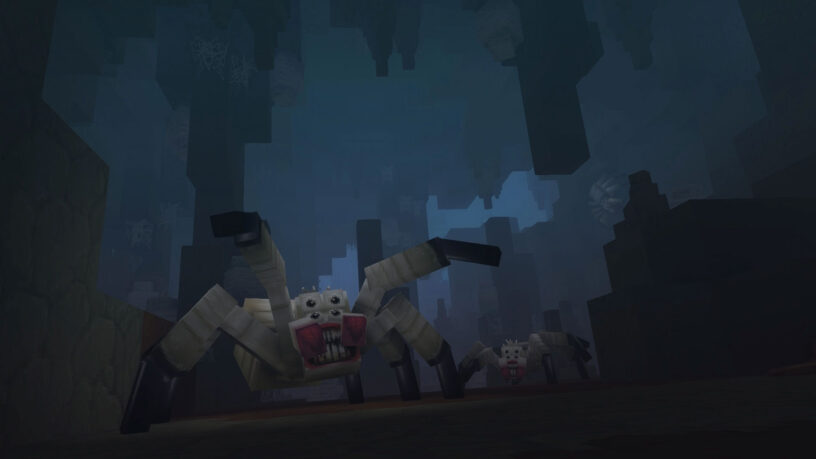 There’s a ton of animals we’ve already seen inhabiting areas of the game already, and there’s likely a ton more to come as we get closer to the beta launch of the game! I’ve gathered up as much information as I could find on the ones that have been displayed in blog posts and in the trailer.

Some creatures and animals are considered “ambient life” which are for adding life to the game and zones you’ll be exploring. It’s unclear at this time whether or not you will be able to interact with some of these species.

These are possibly Antelope or some kind of wild deer-like animal that will be roaming the savannah or desert type terrain.

Bats are likely going to be mostly found in cave systems, but plenty of bats frequent forests and even desert areas in real life. The ones featured in the screenshot look particularly large, so I wouldn’t be surprised to find that they attack if you get too close.

If you were hoping to have a pet kitten in game, it is looking very likely you’ll be able to make that happen. I’m curious how these will work in terms of where they will spawn naturally in the wild.

If you’re into farming and domesticating animals then Chickens are going to be one of the options for you! I’m guessing you’ll be able to collect eggs from the chickens, and potentially feathers but that’s just speculation.

Crabs are most likely ambient styled creatures that add life to the game.

In the forest you’ll likely find quite a few deer. It will be interesting to see what kind of resources they provide you other than just venison. The antlers and hide could have potential for use in certain recipes.

If you aren’t much of a cat person, then you are in luck! There’s dogs in the game as well, this one appears to look like a Corgi. I’m not sure if there will be more breeds, but based on how many varieties of animal there are so far, I wouldn’t be surprised that there were.

Ducks are another of the ambient type of animal that won’t attack you but adds life to the game.

There will be a whole other world to explore under the waves of the ocean! It looks like there’s quite a few species of fish, including Clown Fish and Royal Blue Tang from Finding Nemo fame. You’ll also notice the Puffer fish, and a lot of other types swimming around the coral.

Foxes will be in the game as well, and as you can see they will chase rabbits if one gets into range. This is part of how some animals are programmed, they will interact with other animal and areas based on their proximity.

If you are wandering the forests you might run into some Frogs! These won’t attack you, and provide the game with a livelier feel. It is unclear if they will provide any meaningful resources that should be collected.

Be careful in the woodland areas because Bears will be lurking around and could make short-work of you if you aren’t paying attention! There will be different styles of bear depending on the area, the Grizzly will be found in the forest areas.

It won’t just be friendly fish you find underwater, there will also be sharks! These in particular are hammerheads, you’ll also notice some more humanoid shaped creatures floating around that look like sea monsters!

If you’re looking to travel around the map in style, then you’re going to want to find a horse to tame! These are very likely going to be found in the savanna and forest, and should hopefully be able to be ridden.

Owls are another bird type you will see in the trees. I would imagine these would be found more at night time, but that could be wrong.

Pigeons add another bird type to the game!

You’ll find Polar Bears in the cold areas of the game, this will usually be in Zone 3.

Rabbits are another small critter that can be found in the game. They will need to be spry though, predators will give chase if they get too close!

Rams will likely be found in Zone 3 in the cold most of the time. These can also be ridden by the player, and is featured in the Hytale Announcement Trailer.

Rats could potentially be just ambient animals, but it’s also possible they could end up being an annoyance to you if they can attack. Their red eyes will be particularly creepy in the dark parts of cave systems.

Likely inhabiting Savannah styled areas will be the Saber-tooth Tigers! These are dangerous animals, but they might end up being able to be domesticated and allow you to take them into battle! This has yet to be confirmed, but it would make sense if that ends up being part of the game.

There will likely be quite a few different snakes in the world of Hytale, this one looks to be more of a desert type species.

There’s going to be many different types of birds in the game, but some will be more generic than others.

Spooky and scary, these creepy crawlies will be inhabiting different areas of map. That includes the forests, but also deep in the caves where you’ll have to tangle with these many legged beasts!

The Woodpecker is another bird variant, that can be found in Zone 3 that is more of a snow-based biome.