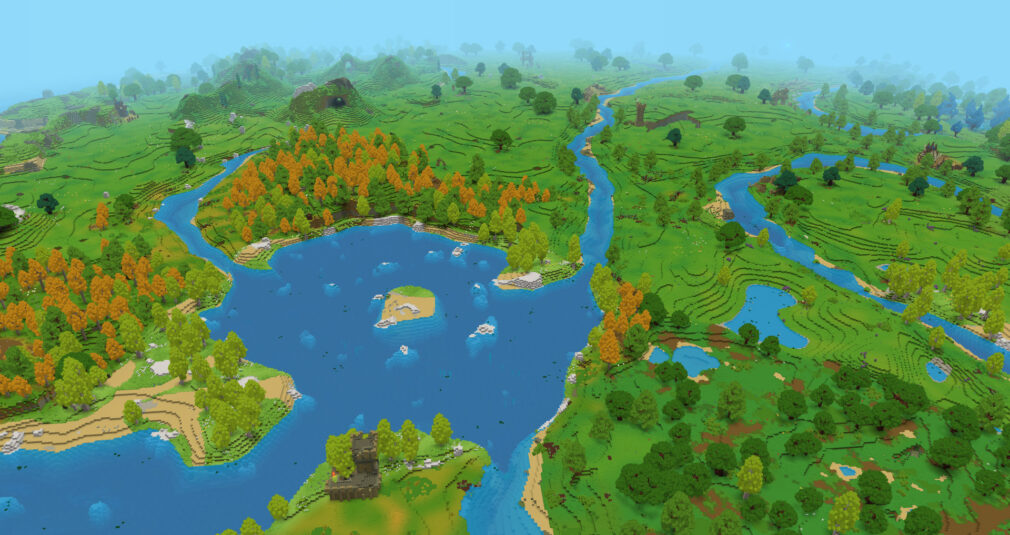 This region consists of lush green plains, forests, lakes, snowy mountains, and swamps. Under its surface are networks of sprawling caves and hot magma deep underground. It is home to the Kweebecs and the Trorks among other species. Emerald Grove, also referred to as Zone 1 is the starting zone in Hytale.

It has been suggested that this page be split into Biome. The Emerald Grove has many different biomes.

Autumn forests are a densely-wooded biome filled with thick trees with leaves that are deep orange and brown colors.

Various blocks such as mushrooms, pumpkin crops, and some decorative glowing plants can be found in the autumn forest.

The swamp is home to various indigenous and unique NPCs such as fen stalkers and frogs.

Caves shall act as a natural entrance to the underground passages that can lead the player to find ruins. In Zone 1, Bears will retreat to their Caves (or Dens) to Rest or Heal from battles. In Zone 3, Caves can potentially be inhabited with a Yeti as well as have Bio-luminescent Mushrooms which can be harvested and used.

The Emerald Grove is inhabited by many creatures including the Kweebec and Trork factions and many different animals. Fen stalkers and swamp undeads inhabit the swamps of the Emerald Grove.

The following is a list of NPCs that inhabit the Emerald Grove:

The Temple of Gaia is a sacred location in Hytale. The Temple resides in a mysterious land and can only be found through a portal on Orbis. Not much else is known about the temple, except that it was confirmed in concept art, and has something to do with the Kweebecs.

The Garden of Elements is an important area within the Temple of Gaia. The Garden serves an unknown purpose, and it is filled with purple trees. In the center of the Garden lies a Golem that has been corrupted by Void magic.